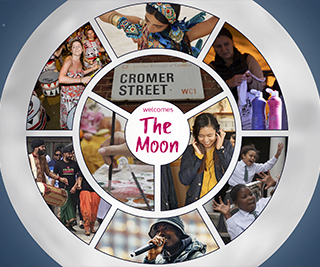 On the night of the full moon Luke Jerram’s Museum of the Moon is revealed in Holy Cross Church. Cromer Street celebrates with music, dance, exhibitions, activities and a host of food stalls.

A creative street party for everyone to enjoy, Cromer Street Welcomes the Moon presents some of the best local talent on the traffic-free street and popping-up in shops, arts, and community spaces. Listen to captivating Bengali music, make your own moon creations, celebrate a new mural by Mohammed Ali, enjoy performance poetry and rap, and a fabulous new dance from Westminster Kingsway students choreographed by Suba Subramanian. Plus much more!

At 6.30pm as the sun-sets and the October full moon rises, join a lunar inspired parade led by Argyle School as it winds its way along the street.

On the Street:
A MURAL FOR CROMER STREET – from 4pm
A new art work by internationally acclaimed street artist Mohammed Ali.

POP-UP STAGE – from 4.30pm
Camden’s own Boss B & Brownsilla perform new tracks from their upcoming album, inspired by working with the Camden Archives and Camden Alive. Plus Conrad Murray, from hip hop theatre company Beats & Elements, will host a free beatboxing workshop open to everyone. Expect lots of laughter, fun and surprise yourself by making beats with your voice! With Camden Alive and Camden People’s Theatre.

PARADE – 6PM
As the sun sets, join a lunar-inspired parade from Kings Cross Mosque & Cultural Centre on Loxham Street, led by Dohl drummers and featuring pupils from Argyle School as it winds its way along the street and into Holy Cross Church to be greeted by the Museum of the
Moon.

OUTSIDE the LAUNDERETTE – from 4pm
Let’s Mend This: Repair Service – A free repair service, bring clothes that have holes that need patching and take part in a conversation about how we can mend things, from society, to community.

UNIVERSAL BARBER – 4pm, 5pm & 6pm
Come and see films made by young filmmakers exploring the lives of Camden residents through movement and story-telling. Made in collaboration with Sidings residents,  The Place centre for contemporary dance and Camden Alive.
PLUS Pollocks Toy Theatre – 4.30pm & 5.30pm – The Flying Saucerers, suitable for ages 5+

ARTS CATALYST
Ignacio Acosta: Tales from the Crust Exhibition – from 1pm
An exhibition by Ignacio Acosta exploring the politics of extraction of minerals from across the planet.
Moon Hat Making – from 4pm
Make a Moon Hat and join in the parade at 6.30pm.

New Event Hotline:
Please note, the Event Hotline number 07555 457157‬ is out of service at this time. Please contact the Production Team for Bloomsbury Festival directly on 07407 139643. This is a new number to the one previously advertised. We apologise for any inconvenience caused. You can also contact the team via production@bloomsburyfestival.org

Camden Alive is a programme of arts and cultural events that celebrates the people of Camden. Camden Alive is part of the Mayor’s London Borough of Culture and is a Mayor’s Cultural Impact Award winner. London Borough of Culture is a Mayor of London initiative with support from the City of London Corporation’s Charity, City Trust Bridge and Airbnb.