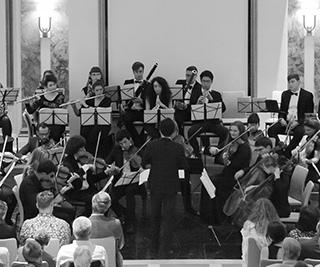 Visual art has always inspired music. In this concert, Goodensemble present a series of musical works that are in one way or another connected to the visual art world. We begin with three operatic overtures to King Arthur, Fairy Queen, and Armide respectively, all of which tell the stories of figures who have been painted and re imagined through the centuries by artists.

And it is not just the overtures. A wonderful selection of opera arias from the Age of the Enlightenment and Baroque periods all with intricate links to subjects that were once popular amongst the artistic circles will also be showcased.

Mussorgsky’s famous Pictures at an Exhibition needs no introduction, but do you know some of the pictures that once inspired the composer are now lost? Alongside the original pictures to be projected during the concert, we have invited a roster of contemporary artists to respond to the music and re-imagine these now-lost pictures, with a modern twist. Come and find out!

Due to current government restrictions on gatherings and social distancing requirements tickets for Music X Art with Goodensemble are currently only available digitally (via zoom) for this event. Should government advice change and we are able to invite a live audience to this event, those who have already booked will be contacted and invited to join the in person audience. If we have to limit the capacity of the live event, due to social distancing restrictions, those that booked first will be offered a seat in the first place i.e. if the capacity is 20 then those that booked the first 20 tickets will be offered a place in the live audience. If you are offered a place in the live audience but would prefer to watch digitally rather than in person then that is fine and the ‘live ticket’ will be offered to another booker.