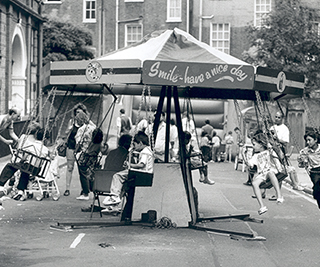 An affectionate depiction of community life in a once infamous King’s Cross neighbourhood during the 80s and 90s, through the eyes of local photographer and resident Catherine Packard.

This exhibition looks at a spirited community, who continually fought for a better quality of life in an area stigmatised by the media and feared by the wider public. The photographs in this exhibition are a tiny snapshot of life in and around Hillview; a Victorian housing estate off Cromer Street originally built to house the poorest of workers. During the 70s, having been practically abandoned by Camden Council, Hillview became home to prostitutes, drug dealers and squatters and was dubbed the ‘Hell Hole’ by local press. Change came in the 80s when Short Life Community Housing a dedicated collective of housing activists persuaded Camden to let them take care of Hillview and other properties. The estate became home to a thriving artistic community, reaching out to the wider neighbourhood through annual festivals, and parties for local elders, a far cry from the stigma attached to it by the media. A successful campaign by the then community saved the estate from being bulldozed. In 2020 Hillview is still flourishing, housing a wide demographic of over 650 people.

You can also view this exhibition online – in both a 2D Exhibition and a 3D Virtual Gallery – below (opens external links):

Once Upon a Time in King’s Cross – Catherine Packard