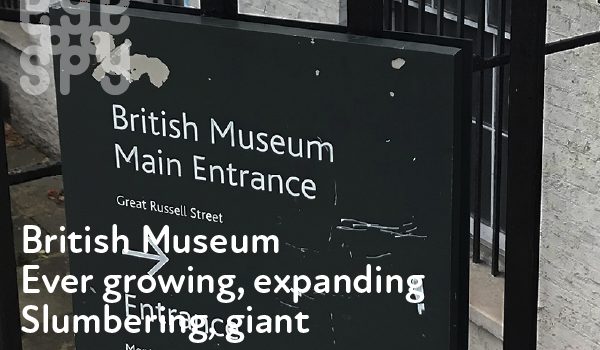 The year is 1740.
Sloane of Sloane Square
Lives in Bloomsbury Place
With a remarkable collection of things –
Botanical,
Geological,
Anatomical specimens.
Antiquities,
Curiosities,
And books.

His private museum, he declares, should be seen by all,
‘Kept and preserved together whole,
Visited and seen
Satisfying the desire of the curious.
For the improvement and information of all persons.’

1753.
Sir Sloane’s death-wish is Parliament’s command.
But where to put the museum? The first dissent begins.
Sloane Square? Too far from ‘central London’
Buckingham Palace? Much too expensive.
Montague House in Bloomsbury? Just right.

The Earl of Halifax moves out,
And the collection moves in.
It’s open for all.
For every single person who may wish to see it – as long as they can get there during restricted opening times, during working hours, and only on weekdays,
Otherwise they’ll find it
Closed.

1823.
The collection has outgrown its building and extensions are planned.
The Montague Place residents do not like the thought
Of ‘a large solid building
Behind our houses.’
They politely inform the Museum’s trustees they ‘trust nothing but
A real necessity of sacrificing our comfort to the public good
Will induce you to allow
Such a building
To be
Erected.’

The trustees’ response is
Silence.

An architect begins his life’s work to build a bigger building around the old.
It takes 23 years.

1846.
The enlarged building is open to all.
The ‘all’ who had time off during working days.
Campaigns begin to open it on Sundays, for working-class families working six days a week.
But the aristocratic trustees
And Tory MPs
Say it can’t be done.

Punch magazine directs readers to the Museum,
‘Which, when you get there, you will of course find
Closed.
Though you may read a synopsis of its contents in a neighbouring pub.’

1860.
The collection’s grown again.
The Superintendent of the Museum’s history dept and the Principal Librarian
Take on Parliament
On the issue
Of space.

The Librarian wants the history section out.
The Superintendent wants his own building.
But Parliament worries history is the best bit –
Good enough on its own, yes, but don’t move it away from the hub of King Cross,
It’s so convenient for day trippers.

Both argument and collection burgeon and bulge
And birth The Natural History Museum.

1896.
The British Museum is open
On a Sunday.
To the delight of campaigners,
But to the dismay
Of museum employees, museum trustees, and societies that demanded Sundays were
A day for rest
And not for the curious.

1936.
The Museum wants to extend further,
To stretch out along its own British Museum Avenue,
But it’s
Blocked.
The Senate House gets built there first.

2009.
Still ever growing, the museum applies for planning permission
To extend further.
The answer:
No.

2020.
The ever-growing giant is temporarily
Closed.
Sleeping under its scaffolding.
With plans to re-emerge from lockdown, to re-open
And welcome back
The curious.