Opening night at the Bloomsbury Festival: A Sense of Belonging

A crowd stands watching a black and white projection on the Holy Cross Church in Cromer Street. Tucked around the back, caged in a garden, a neon tiger growls at an ice-cream van and a rocket bomb man.

Security guards in their own neon jackets protect the tiger from the public. The public, phones outstretched, search the map for their next destination. Babes in arms, babes in prams, one out one in. ‘Is this a queue? It’s so British’. 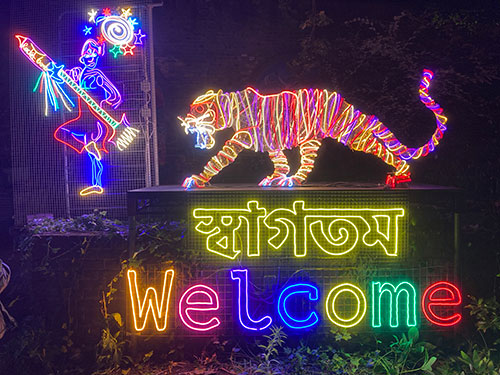 At Conway Hall a pianist reaches in and touches the heart of things, stopping strings, making a noise the piano doesn’t make. She plays with her whole body – blue silk suit rippling. The oud and the drum thrum out a rhythm, fast fingers flying. This is music for dancing, and yet we all sit so still.

The strings of the oud resonate to something within, some cord that goes up through the body. The oud player’s ankles are crossed, and one foot is balanced on a metal frame in front of him – so neat and self-contained. He cradles his oud like a baby.

“When we belong we take it for granted” says one poet. “I am from the imagination of my ancestors” says another.

The pianist plays Scarlatti – her fingers conversing with each other and with the fingers of the other musicians. The music and the poetry explore the theme of belonging. A Ligeti piece jumps from gentleness to panic and back, mirroring the journeys of people adapting to new places, new countries.

Bach and Satie tunes are told through the eyes of the oud and the drum and the lute. Familiar tunes made richer by a multitude of different voices.

> Back to 26 Writers In Residence homepage