As part of Bloomsbury Festival 2019 international street artist Mohammed Ali has spent time meeting and talking with Bangladeshi residents in north-east Bloomsbury to reveal stories from the neighbourhood and their individual personal experiences. These stories have fed into the creation of a mural at Bramber House in Cromer Street which explores stories of journey, struggle and hope by people making the area their home.

The mural will be officially launched as part of Cromer Street Welcomes the Moon creative street party event at 4pm on Sunday 13th October 2019, when the artist will be putting the finishing touches to the mural, and Bangladeshi community members and the wider community are invited to see his interpretation of their stories and hear a soundtrack taken from interviews with local people. There will also be Bangladeshi music, food and dance at the event as well as other arts performances and activities on the street and in the shops and community buildings.

The Bangladeshi community stories are embedded in the artwork and on the 13th October you can listen to them alongside the artwork and in augmented reality by downloading the Camden People’s Museum app and moving around the artwork. You will hear the voices of local residents, sharing their true accounts and personal experiences of living in Camden.

The Cromer St Welcomes the Moon event is on the night of the full moon and everyone is also invited to spend time under a different moon – Luke Jerram’s Museum of the Moon in Holy Cross Church – it is an amazing sight for all ages and all communities. The full creative street programme is here

Mohammed Ali was born and brought up in the Bangladeshi community in Birmingham. He now works internationally. For this project he was hosted in his conversations in Bloomsbury by the KCBNA (Kings Cross Brunswick Neighbourhood Association ) youth group and Bangladeshi seniors lunch club in order to research stories and feed into his painting. A trainee from the local Bangladeshi community is working with Mohammed and the festival to deepen the links with the young members of the community. 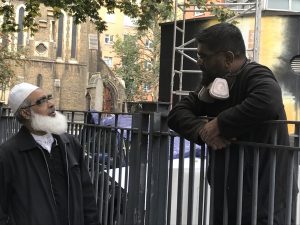 “ If you are painting in public places I feel it is important to try to reflect the community. By listening to local people, I create visual hooks in the artwork based on what I hear from them. I want the art that they may see on a daily basis to resonate with them in meaningful ways.

Whilst the art may speak to the areas large Bangladeshi community, it carries a theme that connects with broader immigrant communities that have come and made Cromer Street their home. Not only that, but much of that same imagery connects with just about anyone in that community, regardless of faith, colour or creed. I like making art that straddles across all communities, whilst at first glance one may assume it’s only for a specific community, one will begin to interpret it in different ways that is personal to their own narratives.

The lunch club members (mostly elders from the Bangladeshi community) were telling of the times they arrived – but the painting is meant to be timeless. Is it speaking of early migrants to Britain, or recent ones that continue to make Britain their home? Is it the 60s or is it the future? It could be either.

The main focus of the painting is a figure with a suitcase overlooking what appears to be London streets. Or Is it? Is it imagining the future of an even more multicultural London? Or a place of fantasy from the future where all cultures collage and engage? The visual landscape consists of a collage of shop signs and street-signage, much of which were mentioned in the recorded interviews, places where many worked over the decades, that provided a livelihood for families. Wheelers Fish restaurant, was one such place of employment, where a Bangladesh resident speaks of working alongside people of all culture. The residents also speak of the challenges, such as racism and experiencing skinheads in the area. They highlight the difficult living conditions of some of the houses and the institutional racism they faced by authorities.

The main figure represents the arrival of early migrants, alone in a big city, with often merely a few pounds in their pocket. This story is very common to much of the working class people who lived in the area.

On the main wall we see the warm light beckoning. Is it the hope that has drawn them to a possibly better life in London or just the light from the hotels and shops pouring into the street. In the foreground is the symbol of the city – the underground sign (partly covered by the structures of the city) or the Bangladeshi words on the signs down the street.

On the right we find ourselves in Argyle Square – the architecture of the city changes to tall Victorian town houses. – night in the city with the moon (the theme of the 2019 Bloomsbury Festival) in the night sky above the buildings.

With the young people their stories included how they can feel invisible – with people striding past to go to meetings with laptop bags…with worlds colliding. This painting is not specifically dealing with their stories (although feeding from it) as a second mural is planned for their youth centre taking the theme of “The future belongs to those who prepare for it today”

This mural is a bold telling of a powerful and important story. The often silent voices of the immigrant community painted in full vibrant colours for all to see as they passed by. By sharing the narrative of the local Bangladeshi community, it explores connections that speak to all communities. When we reflect on the story of others, we reflect on our own narratives and see exciting parallels we never knew existed otherwise.” 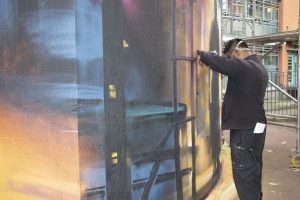 Mohammed Ali is a British-born internationally acclaimed street artist working across the world. His work attempts to build bridges between different communities.

This artwork was commissioned by Bloomsbury Festival 2019 as part of the One Square Mile Project, funded by Arts Council England.

The augmented reality was commissioned by Camden Alive and forms part of the Camden People’s Museum.

Camden Alive is a programme of arts and cultural events that celebrates the people of Camden. Camden Alive is part of the Mayor’s London Borough of Culture and is a Mayor’s Cultural Impact Award winner.

Bangladeshi stories: A Few Pounds in My Pocket by Mohammed Ali